With the use of an Infrared Camera, we can now: 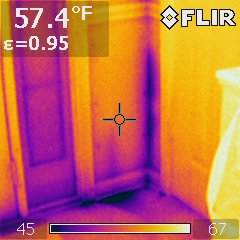 Here’s how it works: An Infrared Camera produces thermal images.  All objects emit infrared radiation as a result of their temperature.  An Infrared Camera has the ability to produce an image of invisible infrared light emitted by objects due to heat or lack of heat, otherwise known as an object’s Thermal Condition.  The camera produces a picture similar to a television picture of heat radiation. In layman’s terms, an IR Camera can ‘see’ where the naked eye cannot!

There are countless other uses of Thermography.  Our military uses it for surveillance. Firefighters use the camera to locate people in burning buildings and it has security applications as well.